Since returning from Italy, the butterfly driving the decision making part of my brain has dictated that I add the railways of that country to my list of model making interests. The Yorkshire component in charge of the wallet opening mechanism had grave worries that it was going to get costly.


I'm not a naive newbie,  there's almost fifty years worth of making trains under my belt, I've taken a keen interest in the overseas scene for many years now, but I still held this preconception that continental HO meant deep pockets and opening boxes. I'm pleased to say that this is wrong, that budget options are available, along with kits and components which enable model making in the style to which I have become accustomed. 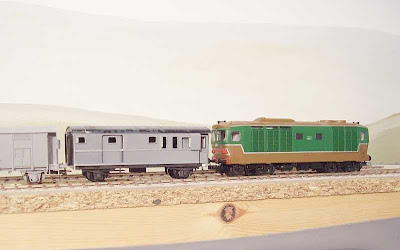 The photo above shows pretty much where I've got to with my Italian interests, and serves to illustrate that economy and craft can be brought to bear. From the right we have a Lima model of a FS D445 which cost fifty quid, forty for the loco and a tenner to post from Bologna. For that you get all wheel pick up and drive, five pole motor and a heavy cast frame. The body is finely moulded and well painted. It seems to me to be on a par with the sort of 00 gauge ready to run diesels we're used to seeing from Bachmann. The one area where  compromise is obvious is the lack of cab interior and the intrusion of the cast frame into this area. However for forty notes it's a steal.

In the centre is a part finished conversion of a Piko German brake van into an Italian baggage van. There's been much cutting and sticking gone into this model so far (detailed here), but it's been most satisfying to be able to deploy familiar model making techniques to an unfamiliar prototype. The donor van cost me three quid, it's one of those cheap and cheerful continental items which turns up at toyfairs and on e-bay at minimal cost.

Finally on the left is an Italeri kit for a goods van. The kit costs about a tenner, about on a  par with similar UK kits from Parkside once I'd added couplings (not included with the kit) and replaced the plastic wheel sets with metal. To build, it again stands comparison with Parkside kits hitting the sweet spot where the balance between ease of construction and the fine detail included is at the optimum.

I have spent considerable time on the interweb researching this new and exciting sphere. I was very pleased to find that many of our fellow Europeans practise the sorts of model making which we are familiar with in the UK. Here's my favourite.

Perhaps it's the efforts of some of our home grown practitioners which have led to the stereotype of pay through the nose and deploy the box contents continental modelling.

Hi Neil,
I have also been trying to do a bit of continental H0 modelling with little or no money; in addition to the Italeri van, are you aware of the kits marketed by Tutto Treno magazine? I bought a couple from the Italian Railways Society stand (if I remember rightly) at the Ally Pally show a few years ago.......similar price, about a tenner, and similar quality. The ones I have are a 4-wheeled refrigerated van and a 4-wheeled tank wagon with brakeman's hut although I'm pretty sure there are others.
Another possibility for a cheap continental H0 vehicle is the old Airfix/Dapol Interfrigo van; at one time STEF and Interfrigo transfers were available for these from the late Andy Hart of the SNCF Society and in an article in SNCF Society journal No.108 he states that the kit is to 1/87 and of a standard continental type.
I've also made some progress on a little freelance diesel shunter which will be a shortened Knightwing kit on an Underground Ernie inspection car chassis; ironically the latter runs far better than the second hand (but still not cheap) Brawa Ko1..........!
I'll be watching this with interest........
Regards,
Simon H.

I also love the train design and many classical train photos

Thank you both for your kind comments. Simon, thanks for the the TTM heads up, I'd stumbled across their range whilst looking for photos of the Carro F. I'm pretty certain that the Italeri kits and the TTM ones are identical, though TTM seem to have a bigger range. Somewhere I have a link to the TTM site. It may be possible to get them to post to the UK but I haven't tried this yet.

I've got my two TTM and one Roco kits spread out in front of me Neil, and am as certain as can be that the mouldings are from the same source. Oddly, although transfers for the Roco Carro F have a Roco logo on the sheet and the TTM tank decals a TTM logo (as does the etch for the hand wheels in the latter) there's no logo on the transfers in the TTM Carro H.........and none of the plastic mouldings has any indication of its source, which is a bit unusual. The TTM kits have a prototype pic' on the box and rather snazzy glossy instruction leaflets with photographic step-by-step illustrations....ironically I suppose nowadays something like this is probably easier to produce than a leaflet with exploded drawings! By the way, my TTM kits still have the IRS price labels, £7.95 for the Carro H and £9.95 for the tank wagon.......bit of a bargain given the quality of the kits which is probably why I bought them!
None of this is really of any consequence I suppose, but of some interest anyway.......and as it's raining here I have been wearing my anorak today, so there.
By the by, isn't Italian a lovely language? Words like "fotoincisione" for photo etched.......picturesque!
I found a copy of a TTM special entitled "Tutto Treno & Storia" on a visit to the Swanage Railway, among the articles was one on small diesel shunters.....with photos of among other things German-built Kof shunters in use on FS; as I've got a Brawa Ko1 perhaps it'll get a repaint into FS green to go with the wagons.
Thanks for this posting Neil, it's re-awakened my interest in the H0 odd and ends I have lying around!
Simon