Today I sat down to read the latest issue of Continental Modeller. I had a pleasant surprise right at the start with the editorial. Normally both Continental and Railway Modeller tread a very apolitical line but here I found a piece critical of our government's handling of Brexit. It's understandable that the staff of a magazine which looks to the continent would be more Europhile than Europhobe but I'm cheered that they have been given space to politely voice criticism. Here's the relevant bit. 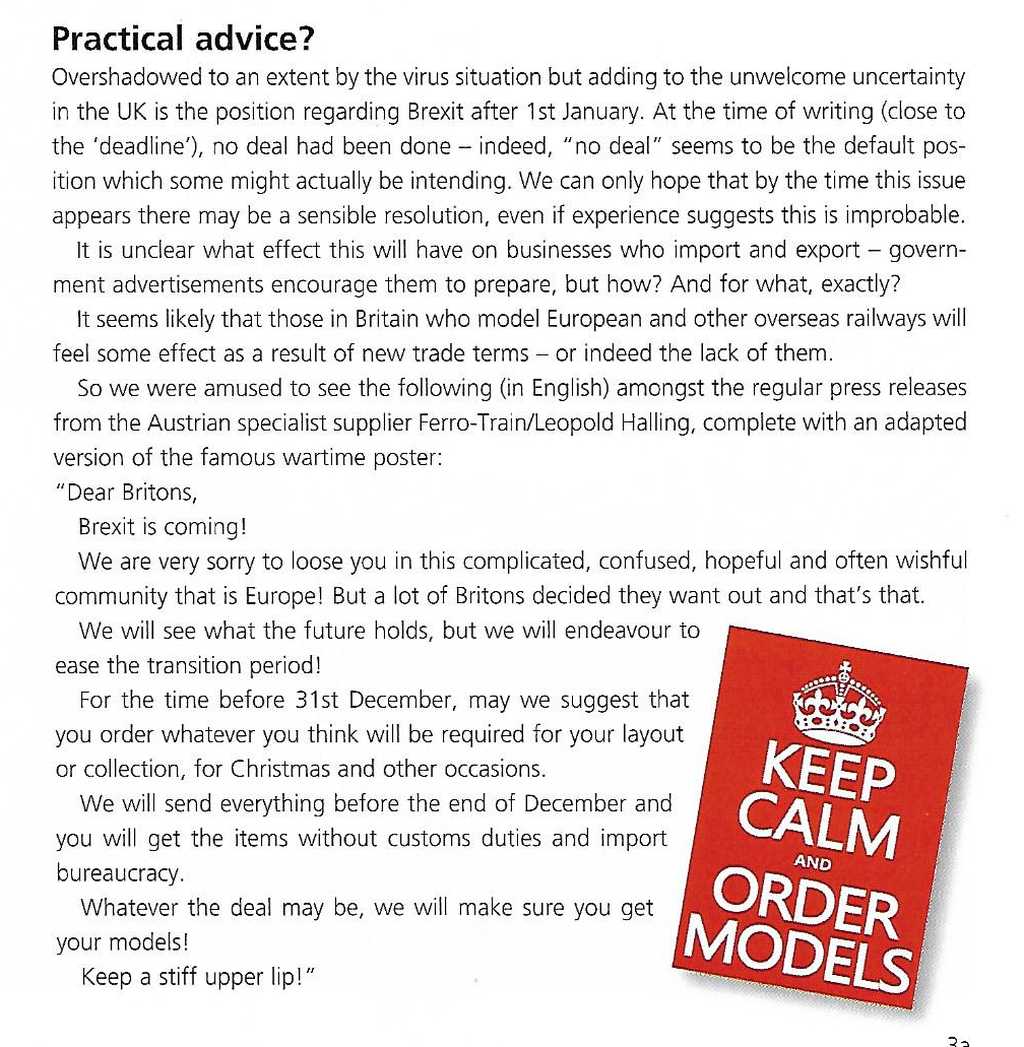 The camera returns to my Belgian HO layout to document progress on the dockside and a further structure. 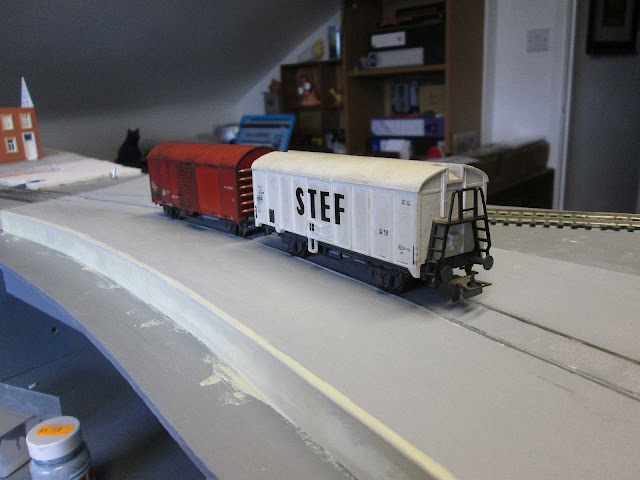 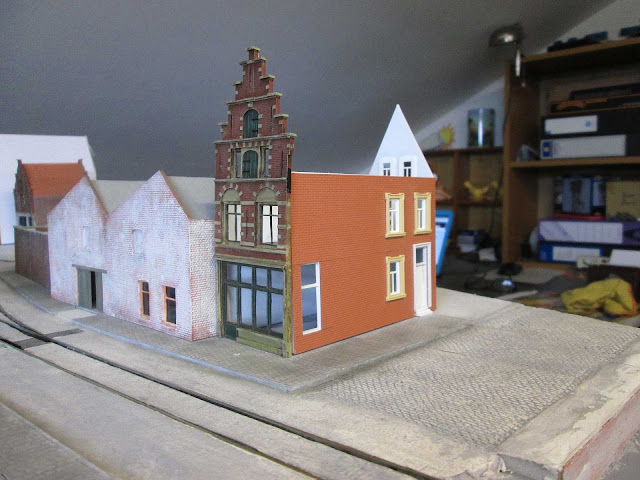 Also coming together on my garage layout the light railway shed scene. The loco shed itself is a reworked Miniart workshop kit, the water tower Bachmann and the grounded van body an old Lima one with a few tweaks by me. 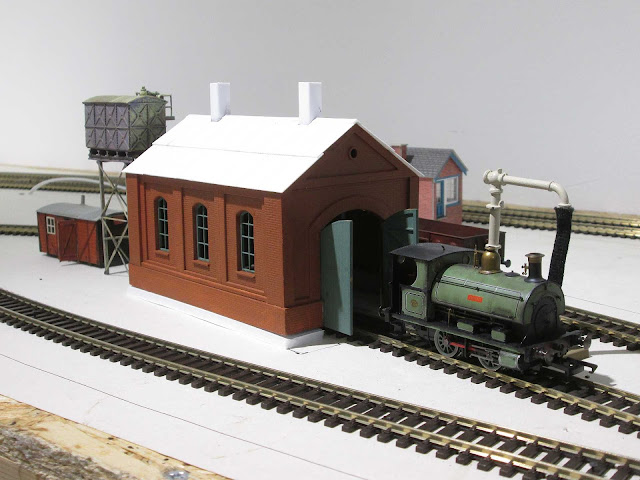 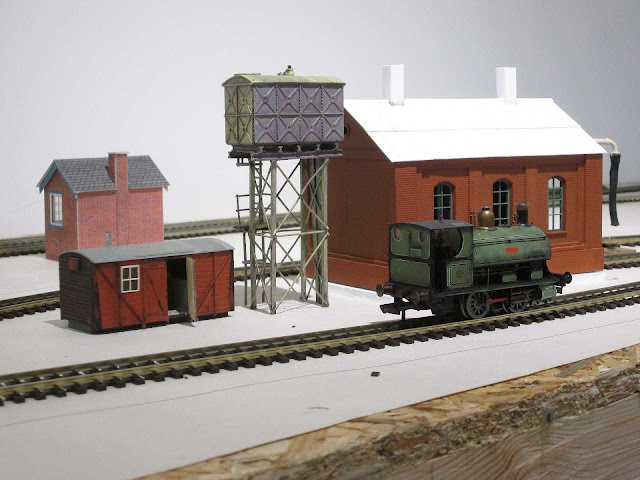 Another stock project but this time for my York inspired OO gauge layout in the garage. It started off as a spare rtr chassis to which I added a plastic outrigger and a big lead weight on top. 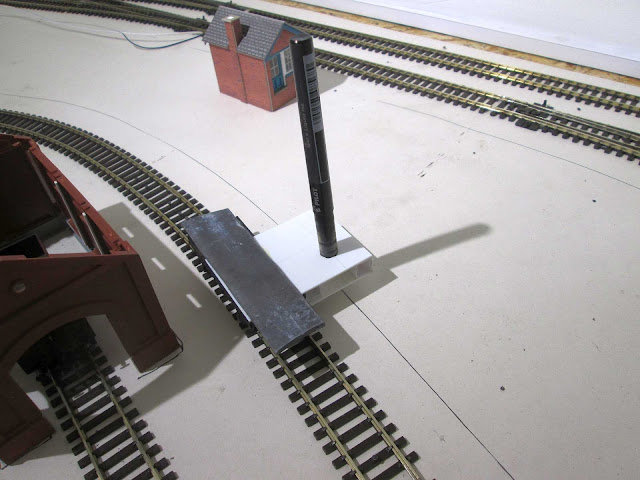 Quite obviously it's not a scale model and what's the pen sticking out from it doing? It's all to do with baseboard construction. The garage layout baseboards were built with flat tops. These were covered in lining paper and track temporarily pinned down and altered bit by bit until I got an arrangement that I was happy with. The outrigger is set so that the pen marks the edge of the formation according to NER standards. This will define the edges of the mdf sections I'll cut to enable the tracks to be raised a couple of inches above the flat deck. 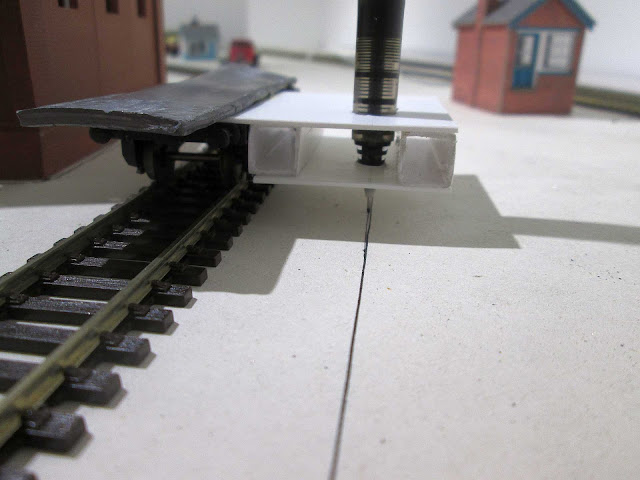 Whilst work on the layout takes places I normally have stock projects on the go too. Most of what we do has a stop - start quality as paint and glue dries. These days I tend to leave longer between coats or for hardening time, so having an alternative project to go to makes sense. For the past few weeks I've been turning a bargain Fleischmann Swedish version of their Prussian G8 into its NMBS 81 guise. Originally it was going to be little more than a repaint but I sort of got drawn in to doing more. Seeing a little success motivates for tackling something else and the whole thing snowballs from there. Here's the finished item sneaking across the pavé. 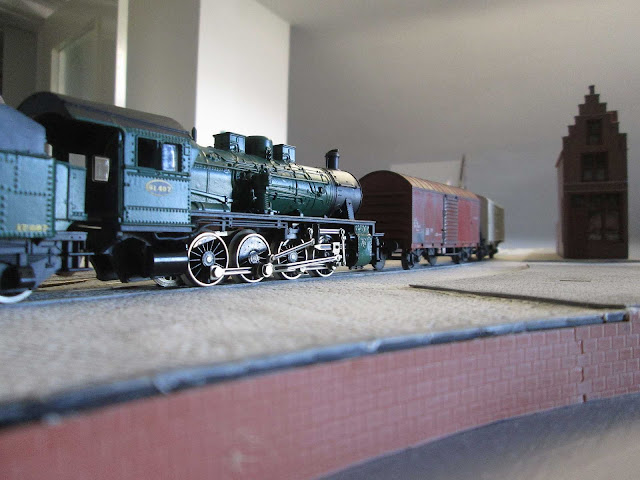 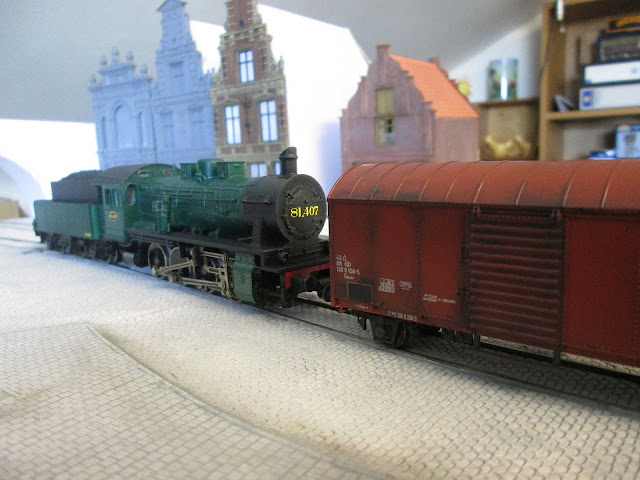 Every cloud has one. My own silver lining is a scarily tidy playroom on account of pest control coming round to spray the upper floor of my home in order to combat a clothes moth infestation. Everything has been found a home on shelves or in cupboards except for Vischkaai's baseboards which have been moved (temporarily) downstairs. Though I could have left them in the room I didn't want to take a risk of what I'd done reacting with the chemicals used in the spraying. Though the board surface look pretty plain and unfinished I reckon that the hours put into just the surface textures will be into three figures by now. 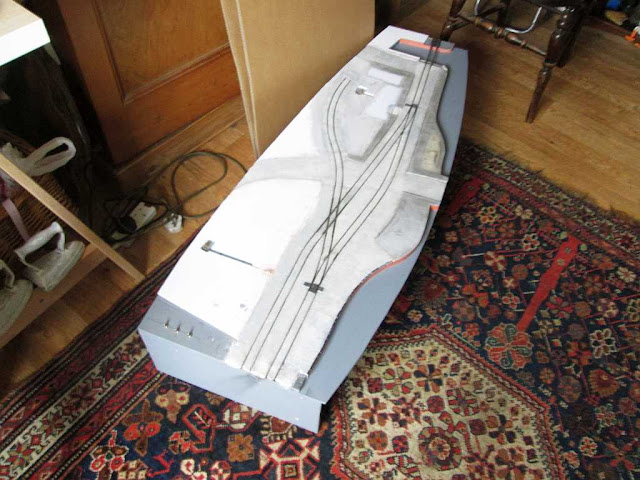 We last took a look at my toys over a year ago. It's frankly not surprising that updates are few and far between, blogs are this century's diaries and I was always rubbish at keeping up to date with diary entries. What's happened in the intervening year is that I've built, or am part way through building a Belgian layout, Vischkaai, designed to be portable with half an eye on taking it to the occasional exhibition. The nuts and bolts of baseboard, track, wires and landforms are done and I'm some way through the scenery. Here are a couple of reasonably current images. 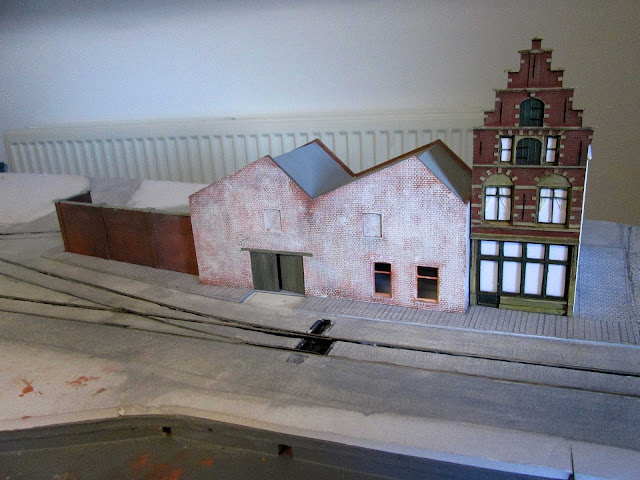 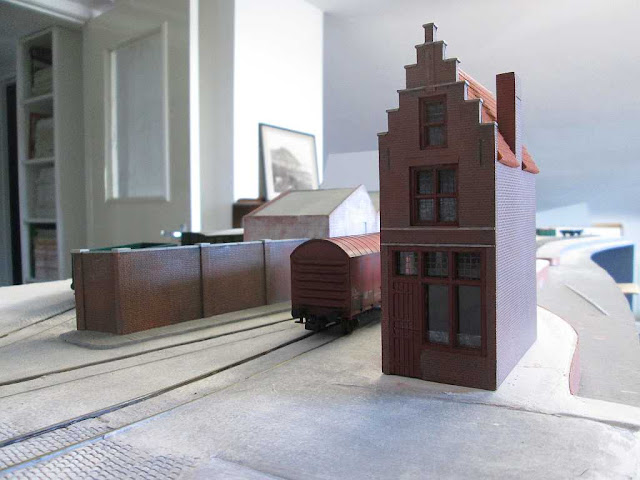 In parallel with the layout build I'm putting together a small collection of stock suitable for an industrial line winding its way through the streets to the docks. So far efforts have been directed at weathering rtr vehicles, and most satisfying it has been too. 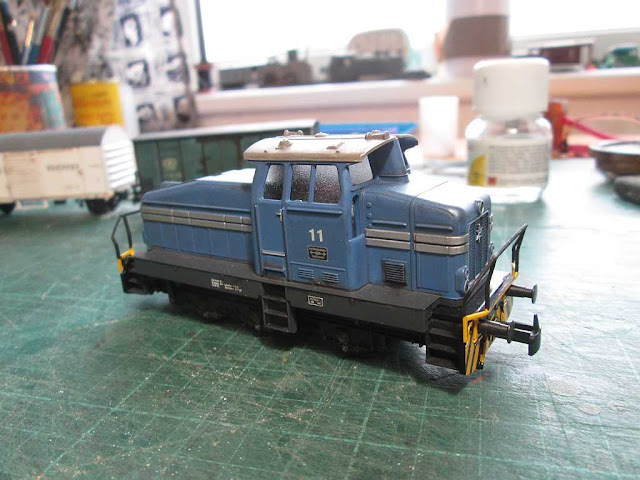 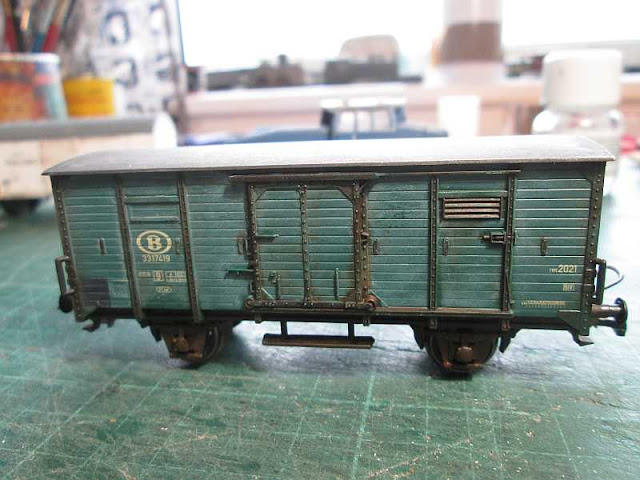 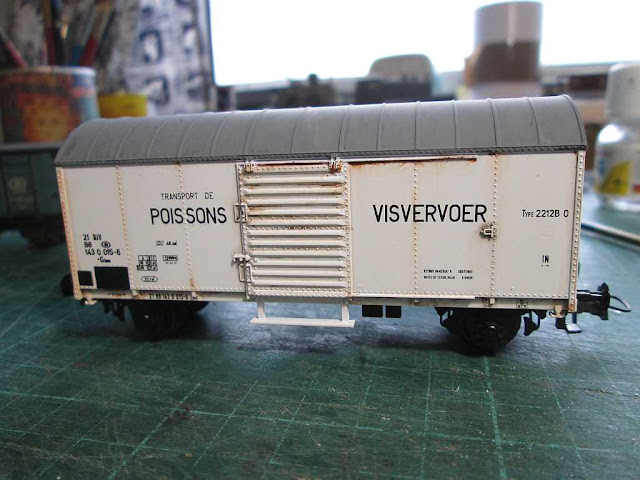